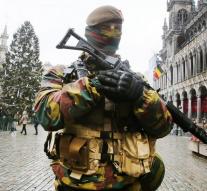 - The Israeli army chief General Gadi Eisenkot this week secretly visited Brussels to discuss the threat of terrorism. According to the Israeli newspaper Maariv said the general with the chief of US forces in Europe, Gen. Philip Breedlove.

The visit was nearly canceled due to the strict security measures were promulgated by the Belgian authorities in response to the terrorist threat. But ultimately Requirements Knot went at the beginning of the week anyway to Brussels under " unprecedented sharp security " according to the sources of Maariv.