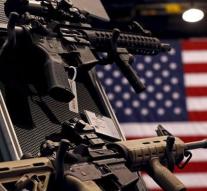 - Arms producers rise Monday on the US stock exchange, casino companies now decline investors to weigh the impact of the attack in Las Vegas with over fifty injured people.

At the attack, where fifty deaths and four hundred injured have fallen, the perpetrator has been killed. He had access to ten weapons, according to the US police.

Wall Street opens at half past four with slight profit, while the Damrak also remains positive.

The arms dealers' shares usually rise after such attacks, counting on the effect that more Americans will buy weapons in response to an expected call for sharper arms procurement rules.