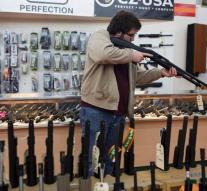 stockholm - Arms sales last year despite the many military and political conflicts fell slightly worldwide. This is the fifth consecutive year that fewer guns are sold.

The Stockholm International Peace Research Institute (SIPRI) reports Sunday that the 2015 hundred largest manufacturers of weapons and military equipment in the world convert jointly 350 billion. That is 0.6 percent less than in 2014.

About two-thirds of global sales in this sector comes in the name of American companies. The Americans put in 2015 to 3 percent. Competitors in Russia did for that matter better. They sold just 6.2 percent.

The SIPRI in Stockholm is generally viewed as an independent and reliable institution.