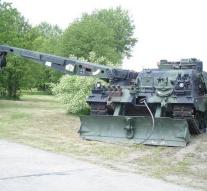 - Conservationists in the Mattheiser forest near the German Trier found a special way to help out certain species bii reproduction. They leave an armored vehicle of the German army in the area around driving and churning up the ground.

The traces that the vehicle left on the forest paths, remains ultimately allow rainwater, creating ideal conditions for certain amphibians. The strictly protected geelbuikpad benefit for example from here. The conservationists show already driving a military vehicle for the third year, according to the broadcaster SWR.