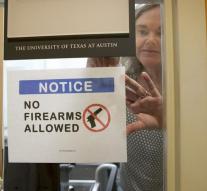 - Students in Texas can now bring a weapon to the colleges. With a legislative amendment allowing proponents hope to prevent future mass shootings. Opponents, however, think that it is a lot less safe by the measure.

To be allowed to carry a weapon, the students must be at least 21 years old and possess a firearms license. the weapons are permitted in all classrooms and buildings of public universities and colleges. Also at the University of Texas at Austin, with more than 214 000 students enrolled in one of the largest universities in the country, the new measure applies.


The law was exactly fifty years after one of the deadliest shootings on a US campus force. In 1966, Charles Whitman shot 16 people dead from a clock tower in the grounds of the University of Texas.

According to the Republican governor Greg Abbott a student with a weapon can prevent such shootings to face the shooter. Because students must be in possession of a gun license, ensures that they are trained for it and that their background is checked, he informed.


University professors are against the new law. A lawsuit to block the law was so far unsuccessful.

Private schools are free to choose whether they allow guns or not. Most do not.