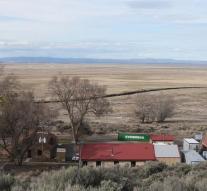 portland - Seven people in January an office in a natural park in the US state of Oregon occupy, are acquitted, reported The New York Times Friday. They were charged with conspiracy and violating the weapons law.

Under the leadership of Ammon Bundy held an armed militia 41 days of occupying an office in the Natural Malheur National Wildlife Refuge. The occasion was a high rising conflict with the federal government over land ownership. During the occupation, the FBI shot dead an occupier.

According to prosecutors, the six men and one woman prevented by intimidation, violence and threats that the park staff could do his job. It is not yet known why the jury acquitted the seven Thursday.