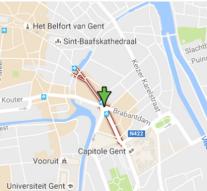 - In a shooting in Ghent shot an armed man.

VTM News writes according to eyewitnesses. According to unconfirmed reports the man fired shots in the Flanders Street, in the center of Ghent. Upon arrival the politei he would have refused to give up his weapon.

What exactly happened is still unclear. Possibly the shooting took place in a restaurant and was the gunman owner.


There is no information about casualties yet.