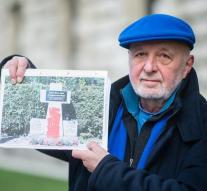 munich - Wolfram Kastner is the Cross of Honour for the Wehrmacht General Alfred Jodl smeared with text and strokes. He fights with a survivor of the General court battle over the Cross of Honour. The judge has not come into judgment yet on whether it may continue to cross or to go.

Jodl was after the Nuremberg trials in October 1946 hanged as a war criminal. It was during the Third Reich of Adolf Hitler operations chief of the army and as such engaged in all wars fought Germany during World War II. After his death, burned his body and scattered into the Isar river.

His family, however, pointed to a cemetery on the island in Bavaria Frauenchiemsee a Cross of Honour on. Which stands next to the grave of Jodls wife Luise. Kastner, who calls himself action artist, wrote in red paint Kriegsverbrecher (war criminal) on the cross and painted the name Jodl whole way.