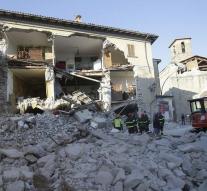 rome - In Italy, a fight erupted over a memorial service for victims of the earthquake last week. The moves in Amatrice planned service was Monday in the provincial capital of Rieti, but shifted to Amatrice weather after strong protests from the mayor and survivors.


Certainly 229 of the 290 deaths came from Amatrice. The service will be held possibly in the open air; most of the town is in ruins, including the church. Last Saturday there was a state funeral for some of the victims in Ascoli Piceno.