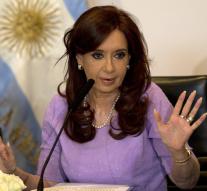 - In Argentina held Sunday presidential elections. It is the first time in twelve years that Argentines thereby can not vote for a member of the Kirchner family.

The Kirchners fulfill since 2003 the highest office in the South American country. In that year, Nestor Kirchner won the presidential election. He was succeeded in 2007 by his wife, Cristina Fernández de Kirchner. She is now constitutionally barred from a third term.

The president has expressed support for Governor Daniel Scioli, which is leading in the polls. He promised last week to remove the income tax for anyone who earns less than 30 000 pesos (almost 2900 euros). His main challenger, the liberal mayor of Buenos Aires, Mauricio Macri.

The approximately twenty million voting Argentines not only a presidential vote. There may also governors, mayors, senators and numerous other officers are elected.