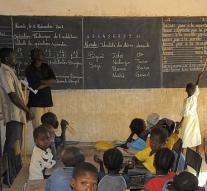 bonn - Despite that progress, go still 263 million children worldwide do not attend school. This emerges from a study of UNESCO, the educational organization of the United Nations. In 2000 received no education, but since 2007, 375 million children progress always goes slower.

The largest group consists of children between fifteen and seventeen years old, about 142 million. Because there is no compulsory education for children of that age go or should they often work in many countries. Especially in the southern part of the African continent remains around 60 percent of children in that age deprived of education. Reasons include poverty, place of residence, war and sex differences.


The UN aims to give everyone access to education by 2030.