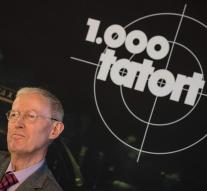 berlin - ARD has decided the delivery of the successful police series Tatort which would be broadcast on New Year's Day, still let you lie on the shelf following the attack in Berlin. The episode 'Storm', according to the German TV channel 'very exciting' but also contains images and impressions that 'evoke associations with the terrorist act at the Christmas market.'

The film, which was recorded in Dortmund, ends with the suicide of a jihadist with a bomb belt, which also killed others in April and May.

'Tatort One must, of course close assist the social reality, but out of respect for the victims, survivors, stakeholders and feelings of the viewers we do not want to show on the first day of the new year this episode. There must be more time between 'program director Volker Herres explained. In 2015, the ARD introduced following the terrorist attacks in Paris the diptych 'The great sadness' and 'Purgatory' more than a month because terrorism also played a role.