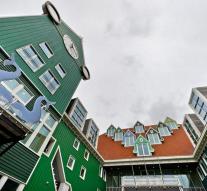 zaanstad - Architect Sjoerd Soeters (70) received the reward of Zaanstad. Soeters designed the town hall of Zaandam, the largest city of the municipality of Zaanstad. The town hall falls because it is made up of eight vastly enlarged houses, with the appearance of typical Zaanse green wood construction.

Soeters was the supervisor of the Inverdan program, which changed the view of Zaandam's entire inner city.

'With this he has put an important stamp on the successful renewal of Zaandam's city heart in the last fifteen years,' according to the municipality.

Soeters was inspired by the design of the town hall by the traditional Zaanse architecture.

The building has four floors and covers an area of ​​25,000 square meters. Under the special city hall is a modern bus station that was put to use at the end of 2010.

Well-known other designs of Soeters are Circus Zandvoort and the Pyramids in Amsterdam.