Home / World / Archer Alexandria was not happy with Trump 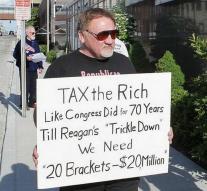 washington - The man who opened fire on Congressmen in the US Alexandria on Wednesday was struck by the election of Donald Trump as president of the US. That has declared his brother to The New York Times.

The 66-year-old James Hodgkinson opened the fire during a training of a Republican baseball team, the party of Trump. He injured five people and was subsequently shot down by the police of the US Parliament, who was present for security. He died later.

According to his brother, Hodgkinson had gone to Washington in recent weeks to protest against Trump. 'I know he was not happy with the progress, the outcome of the election and so on. '