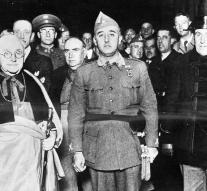 madrid - Archaeologists in Spain found more bodies in mass graves from the civil war of 1936-1939 and the subsequent dictatorship of General Franco. On some bodies there were still rotting leather boots.

The excavations at a local cemetery in Valladolid in central Spain come when new efforts are being made by volunteer associations and campaign groups for victims to shed light on the bloody past. They are still hoping for an end to relatives who are still looking for their dead.

Four mass graves have now been excavated in Valladolid and 228 bodies have been discovered there since April 2016. These graves are some of the more than 2,000 mass graves from the civil war throughout Spain.

Historians estimate that about half a million warriors and civilians were killed in this war.