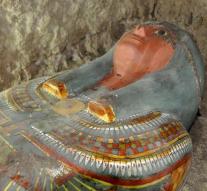 - Archaeologists have in Luxor in a tomb of the valet of Thutmose III found the mummified remains, famous pharaohs of the New Kingdom of Egypt (1481-1425 BC). The mummy is in accordance with the finders in excellent condition.

The archaeologists team consisted of Spaniards and Egyptians, the Egyptian newspaper Ahram wrote Monday. They found in the tomb originally a wooden coffin, but it appeared to be the mummy. The site is in the so-called Temple of a Million Years, by al-Deir al-Bahari. The Department of Antiquities in Cairo declared the find as 'perfect'. The valet was called historians presumably Amenrenef.