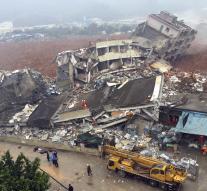 - After a landslide Sunday in the southern Chinese city of Shenzen be sure 41 people missing. The landslide hit an industrial complex. At least 22 buildings have been buried under mud and debris, according to the Chinese state news agency Xinhua.

Dozens of employees of the firefighters searching for survivors. They saved so far seven people. One of the rescued people were slightly injured.