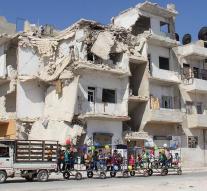 istanbul - Russia, Iran and Turkey have made agreements on a fourth so-called de-escalation zone in Syria. Observers from the three countries, according to Ankara, make sure that government forces and armed opposition leave each other in the area in the Idlib region.

'The observers are deployed in control and observation posts in safe zones that form the boundaries of the escalation zone,' the Turkish Ministry of Foreign Affairs reported after consultation in Kazakhstan. Russia and Iran are the pillars of the Syrian regime; Turkey just supports some groups fighting against President Bashar al-Assad.

According to sources from the Turkish state press office Anadolu, the agreement will put an end to the battle on the ground. The air attacks would also be discontinued. The countries previously identified three other areas as de-escalation zones.