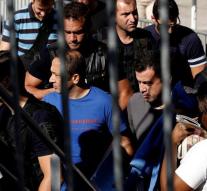 athens - Greece rejected the asylum applications of three Turkish soldiers. That have sources said Wednesday at the Greek police. The three are part of a group of eight Turkish soldiers who fled their country after the failed coup in July.

The eight, who deny something to do to have had with the coup attempt, flew on July 16 in a Black Hawk combat helicopter to Greece and requested asylum there. However, they were arrested and convicted for illegally entering Greece. Turkey has requested the extradition of eight and calls them traitors and terrorist elements.

The three of whom are now asylum application has been rejected have sufficient evidence that they were not involved in the coup attempt, said the sources. The lawyer of the soldiers have to go all out in an appeal against the ruling.