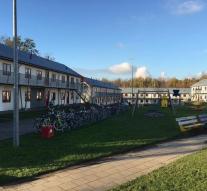 heerlen - A 19-year-old resident of the refugee center (azc) in Heerlen is since Wednesday night in the cell. He is suspected to have raped a woman on the Scale Dealer Edge in the same place.

Just before 2:00 pm a witness saw a man and woman together in which he did not trust the situation. He warned the police that could keep the man red-handed on suspicion of rape. The victim was wounded and taken to hospital. It is a 51-year-old woman from Landgraaf.

The suspect will be arraigned Friday at the Judge Commissioner.