Home / Tech / Apple suppliers are not equipped for OLED 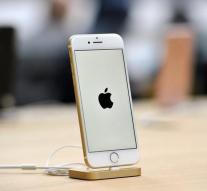 - Apple wants to bring in 2017 iPhones on the market with an OLED screen, but vendors warn the company that can be a problem. According to Bloomberg, Apple has approached a number of suppliers, but seems none of them able to meet the expected demand by Apple.

Samsung would be in the market to become the sole supplier of OLED screens for the iPhone, but the South Koreans hiccup against the expectations of Apple. The other parties approached, LG, Sharp and Japan Display Inc., Come up with similar sounds. The preference for a single supplier is probably due to previous screen problems. In the past iPhones with screens of different vendors showed still sometimes see significant color differences.

For the anniversary year- the iPhone is made in 2017 for ten years- still be able to make the transition to OLED, Apple is considering now to provide OLED only one model. Next to the display is also the design of the iPhone underway. Apple reportedly working on an iPhone that is made entirely of glass.