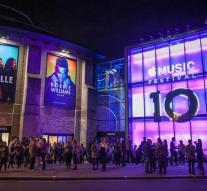 - Apple pulls the plug from its own Apple Music Festival. The reason for the end of the London festival has not been announced.

The technology giant confirmed the end of the annual recurring event against the online magazine Music Business Worldwide. This brings to an end to a festival that has been performing since 2007 like Lady Gaga, Coldplay and Paul McCartney.

The Apple Music Festival, which began under the name iTunes Festival, consisted of a series of concerts in London in the one month period. The US company shortened the last two editions for a week.

Fans from the United Kingdom could win free concert tickets by participating in lotteries through iTunes. That set-up did not fit in with all the artists. For example, Arctic Monkeys frontman Alex Turner complained about the lazy comments from the public in 2013.