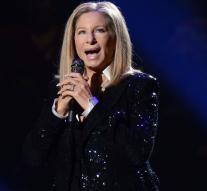 - Barbra Streisand has asked Apple's speech recognition application called Siri, adapt so well pronounce her name. That tells the singer in an interview to the American NPR.

,, It goes from my name wrong, '' Streisand talks about the software. Streisand her last name to be pronounced according to the diva with a soft, instead of a hard s,.

Barbara decided, after hearing the false statement by Siri, contact Apple.,, I called the boss of Apple, Tim Cook, and he promised me that the next update to Siri to pronounce my name right, '' says the singer.


Apple is expected in late September with a new version of its mobile operating system iOS where Siri part. Barbra told NPR anxiously waiting for the update.