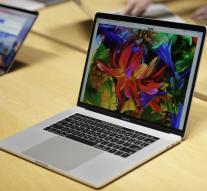 - Apple on Thursday as expected, presented an update to its MacBooks. The new devices are equipped with a fingerprint sensor for Apple Pay, the payment service of the tech company. Also, the devices much lighter than its predecessors.

Furthermore, the MacBooks have a special OLED strip above the keyboard on the spot where formerly were the F-keys. This small touchscreen called Touch Bar responds to touch, for example to increase. According to Apple was the old technology 45 years old. 'We use no more,' Apple CEO Tim Cook said the change.

Apple presented exactly 25 years since its first laptop, the PowerBook. The latest MacBook Pro is 6.8 million times as fast as the PowerBook.

Cook climbed traditionally the stage to present the latest products. He also unveiled the new TV app. This will include searching and viewing of series and films from different apps on Apple TV, iPhone and iPad easier.