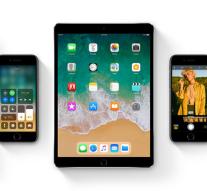 cupertino - Tuesday evening, Apple releases the annual update for the mobile operating system iOS. At 19:00 Dutch time, people with a not too old iPhone, iPad or iPod Touch can update their device to iOS 11.

Especially for iPad users, iOS 11 brings a lot of new features. For example, Apple tablets get a dock (start menu) similar to the dock on macOS. Apple hopes to bring the iPad more and more to the man as an alternative to a laptop. Other new features such as drag and drop, a new app switcher and a more extensive keyboard are specifically aimed at iPad users.

Still, there are plenty of novelties in iOS 11 for people with an iPhone or iPod. For example, Siri has received two new voices in Dutch, a new men's voice and a female voice for the first time. The technique behind Siri is well addressed. The speech assistant is smarter and conversations should be a lot more human.

In terms of design, iOS 11 looks like its predecessor. However, more bold titles and more defined buttons can be found in the system. iOS 11 looks just a little bit more modern. The App Store has been completely renewed. The new app store focuses on discovering new apps and games.

Other, minor enhancements to iOS 11 include a File app (a sort of Explorer for iOS), the ability to customize Live photos, Notification Center and Control Panel merge, Speed ​​Indications, and Driver Tracking in Apple Maps and The ability to store health information in iCloud.

iOS 11 can be used on virtually all new iPhones, iPads, and iPods. The iPhone 5S, iPad Mini 2 and all devices released afterwards can turn iOS 11. People who want to install iOS 11 on an iPod need at least a sixth generation iPod Touch.