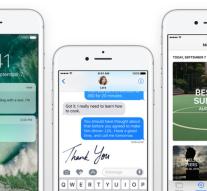 - Apple iOS users for the holidays treated to a major iOS update. Monday released iOS 10.2 gives the mobile operating system from Apple a few new features, but the key is not available for Dutch, the new TV app.

The new TV app, a hub for different TV providers with an integrated TV guide, is preliminary to download only in America. Apple has already announced that the TV app also comes to other countries, but specific data is not discussed again. It seems at least unlikely that we are dealing with the new app quickly get in the Netherlands.

From the TV app there are other innovations that iOS 10. 2 for non-Americans make worthwhile. So Apple has eliminated quite a few bugs, the interface at certain points some improvements, new emoji, it is easier to shuffle the music app, there are to find new wallpapers and Apple has some new screen effects iMessage added to iOS.