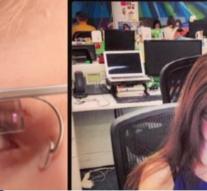 - Tech giant Apple is working on glasses that can combine the image of the real world with the virtual world, the so-called augmented reality (AR). That Bloomberg reported according to insiders. Apple's project is still in the exploratory stage. The glasses would be wirelessly connected to iPhone, where images and other information may appear in the visual field of the wearer.

Apple would already with potential suppliers to have sat around the table and have to buy so-called near-eye 'screens. Apple might want to continue the project, then the glasses are introduced in 2018.

Among the more popular Pokemon Go, where the creatures through the smartphone to be trapped in the real world, made use of AR. Earlier flopped a Google glasses project, partly because the device's battery ran out quickly. Also, privacy issues were that project transversely.