Home / Tech / Apple is working on reality series about appmakers 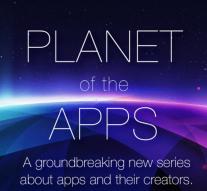 - After Amazon and Netflix, Apple now plans to make his own TV series. The company starts with Planet of the Apps, a reality series in which appmakers must compete for attention from investors.

The program makers are currently looking for developers who want to participate in the show. For this they have to submit an idea for an app for the iPhone, iPad, Mac, Apple TV or Apple Watch.

During the shooting the appmakers will include contact with investors, according to the 'casting call' to want to invest $ 10 million in various applications. The recordings begin in late 2016 and run through to early 2017.


When and where exactly will be seen the series, is not yet known.