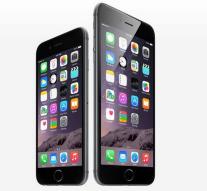 - It is even impossible for Apple to get an iPhone data like this version 8 or higher and iOS operating system is protected by a PIN or password. That has let the company in a statement in court.

Apple calls this the feasibility of accessing data on a seized during an investigation iPhone. The company responded that this is only possible in case the device has not been updated to iOS 8 or 9. Once that is done, all data is encrypted on the phone so that even Apple can not decode it.

Unfortunately for the police have now 90 percent of iPhone owners already did. It is a godsend in this particular case that the iPhone is still in question is an older version.

Nevertheless, Apple is reluctant in this case to help the police. The company also calls the judge not to force it to obtain the data. This would lead to a breakdown of trust between Apple and its customers. The judge has not yet decided on this.