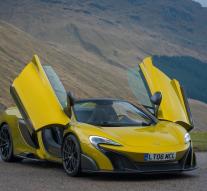 - Apple interested in the activities of the manufacturer of luxury cars McLaren, and would consider taking a large stake in that company. That various media reported Wednesday according to insiders.

Apple has been working for more than two years of self-propelled electric cars. An investment in or acquisition of McLaren would project can advance significantly. It would be the author of, among other things the iPhone make available vehicle technology is also used in Formula 1. The purchase price for the loss-making McLaren could amount reportedly to 1.5 billion pounds (1.7 billion euros).

Apple also be interested in the acquisition of Lit Motors, a start-up in the field of electric motorcycles. That company has several international patents for technology for self-propelled vehicles. It would also hunt Lit include BMW and Audi.

McLaren chief executive Michael Flewitt Wednesday denied being in talks with Apple about possible investments. McLaren has for more than 55 percent owned by the investment vehicle of the Kingdom of Bahrain. The Luxembourg-based TAG owns 11 percent and McLaren chairman Ron Dennis has 10 percent. He's also McLaren Racing team boss.

Apple and Lit did not respond.