Home / Tech / ' Apple has a secret lab in Taiwan 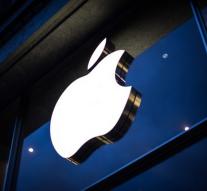 - Apple has opened a secret laboratory in northern Taiwan. Sources around the technology company reported Tuesday that it is working on new display technologies.

In the lab instead Longtan work reportedly at least fifty engineers and other personnel to new displays for iPhones and iPads. The Apple employees would be recruited by the former owners of the property, screen manufacturer AU Optronics and chip maker Qualcomm.

By developing display technology Apple wants according to the sources become less dependent on suppliers such as Samsung Electronics, LG Display, Sharp and Japan Display.