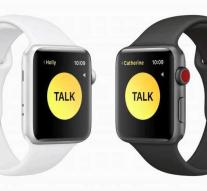 brussels - Apple will probably present six new versions of the Apple Watch next month. The French tech site Consomac has found the models in a database of the Eurasian Economic Union, the partnership of Russia, Belarus, Kazakhstan, Kyrgyzstan and Armenia. This means that they can enter the market in those countries.

According to Consomac, the models from Series 4 will run on operating system watchOS 5. It is likely that three different models will be available and each model will soon be available in two sizes. Analysts had previously predicted that the new Apple Watch would have larger displays than its predecessors.

The database of the Eurasian Economic Union has already revealed the iPhone 7, AirPods, the second series of the Apple Watch and the latest MacBook Pro.

It is not yet known when the Apple Watches are presented exactly. Last year it happened on 12 September.