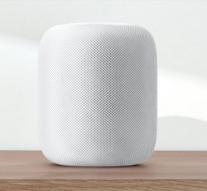 san jose - IPhone producer Apple will announce a speaker based on voice commands later this year. The device, called HomePod, operates on the basis of Siri, the voice assistant of the company.

The features of the device largely match what Siri can do on the iPhone and iPad. For example, it's possible to search, schedule appointments, call contacts, and play music.

If users also have smart home appliances, they can also be sent via voice commands for the HomePod.

To distinguish itself from the competition, Apple is focusing on sound quality. The speaker incorporates technology that enables 'music broadcasts' to be sent out so that it can sound full in each room.

The HomePod costs $ 349 in the United States and will be released in December. In other countries, he will only be out next year.

Aartfijand Google recently launched a smart speaker called Google Home. The forerunner in this area, however, was Amazon, who with his Echo speaker banned this market.