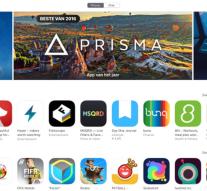 On the iPad were digital diary Day One Journey and Severed game winners.

The most downloaded free iPhone app of 2016 was WhatsApp, while 7 Minute Workout was the most popular paid app for Apple's smartphone. Pokemon Go spent the past year the most.

The application on the iPad Netflix proved popular, while the mobile version of the popular game Minecraft sold best on the tablet. Puzzle game Candy Crush Saga spent the most money on.