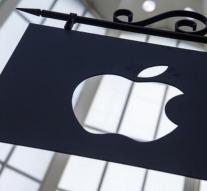 - Apple has bought the Indian-American business Tuplejump, TechCrunch reports Thursday. The company is engaged in machine learning and making huge information flows easier available. Apple bought last year all the machine learning company perceptio and in August it was announced that the tech giant had swallowed the company Turi.

Apple has not officially confirmed the purchase of Tuplejump but TechCrunch did give the standard response that gives it always as it has taken over a company. It proposes \'to take over smaller technology companies from time to time 'the company' 'and' 'generally do not discuss our purpose or plans.'