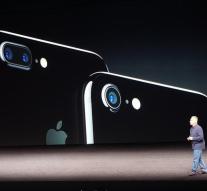 - Apple benefits from the problems with the Galaxy Note 7 competitor Samsung. Because a lot of notes are called back because of explosion hazard, many consumers opt for the iPhone 7 Plus as an alternative. Or so says analyst Ming-Chi Huo of KGI Securities.

Demand for the iPhone 7 Plus, according to Huo higher than expected, but that is not to say that Apple really has beaten a hit with the recently announced iPhone 7 and iPhone 7 Plus. The \'regular\' iPhone 7 is according to Chinese analyst namely against. Predecessor iPhone 6s did better and Huo do not expect the figures will attract even bad.

What strikes continue in the Apple expert to the first sales figures, is that especially the new Jet Black paint scheme does well. Worldwide, about 35 percent of all iPhone 7-buyers for a smartphone in Jet Black. In China, the figure is even higher, as almost half of all sold iPhones features the glossy black finish.