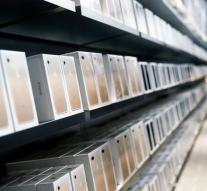 - Apple and Google are the most valuable brands in the world. They are at the top an annual ranking which consulting company Interbrand published Wednesday. In the top twenty are beyond Microsoft (fourth place), IBM (6), Samsung (7), Amazon (8), Intel (14) Facebook (15), Cisco (16) and Oracle (17).

The fastest climbers are Facebook (48 percent raise), Amazon (plus 33 percent) and Lego (25 percent growth). Hewlett Packard and Tesla are new in the top 100.