Home / World / 'Applause does not make sense, you have to die 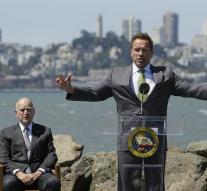 - The world should not be demotivated by people like President Donald Trump when it comes to the environment. That is the message that Arnold Schwarzenegger presents by working on the nature documentary Wonders of the Sea 3D.

The 70-year-old superstar commented on the new nature documentary of activist Jean-Michel Cousteau, who made 3D surveys for 5 years on the bottom of the ocean. The docu is hosting his Dutch premiere on September 16 at the Film by the Sea in Vlissingen festival.

'Complaints do not make sense, you have to do something,' Schwarzenegger said earlier this year during interviews about the film at the Cannes festival. 'You have to divide! Do not let yourself be demotivated by someone like President Trump: The future of the earth depends on 7 billion people, not one human being. The people who believe in a better world are passionate and have the facts and ideals on their side. It's a crusade; People must understand that it does not work well if we do not try to change anything. '

As Governor of California, Schwarzenegger ensured that his state was given the best US environmental legislation. The White House worked against him, but the Governor continued until the Supreme Court and got right.

'I've surrounded myself from the very first moment with people who knew exactly how politics worked; Of course, I had no experience as a governor. They taught me that collaborations are the most important in politics. And I did that, I've worked with the Democrats, 'says the prominent Republican actor.

On some subjects, the two major American parties may differ, but some things are greater than the party interest, says Schwarzenegger. 'And green legislation does not have to prevent economic growth. On the contrary, we created a lot of green jobs during my deadlines and afterwards; There is currently no sector providing more jobs. '

For the documentary, with which Schwarzenegger wants to pay more attention to the climate problems that also undermine life, biologist Jean-Michel and his children Celine and Fabien traveled for years to capture life in the oceans.

Wonders of the Sea will be featured in theaters in the Netherlands in early 2018. Distributor Dutch FilmWorks releases the film. The ticket sale for the documentary on Film by the Sea has already begun. The 19th edition of the festival takes place from 8 to 17 September.