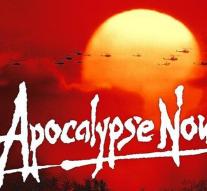 - Film director Francis Ford Coppola has launched a Kickstarter project to raise money for a video game based on his famous Vietnam film Apocalypse Now. He has $ 900,000 needed to create the immersive, psychedelic horror RPG.

'Forty years ago I began a personal film that could affect hopefully for years to generations of viewers. Today I want to work with a team of daredevils create an interactive version of Apocalypse Now, in which you are Benjamin Willard against the backdrop of the Vietnam War. I have seen how video games have become a useful way to tell stories and I look forward to exploring the possibilities for Apocalypse Now on a new platform and a new generation, 'says Coppola.

Coppola as producer will oversee the project through American Zoetrope, his production company together with George Lucas. He also professionals engaged in the development of the game Apocalypse Now. Montgomery Markland (known for Wasteland 2 and Torment: Tides of Numenera) is the managing director, Lawrence Liberty (Fallout: New Vegas and The Witcher), executive producer and Rob Auten (Gears of War: Judgement and Battlefield: Hardline) is responsible for story.