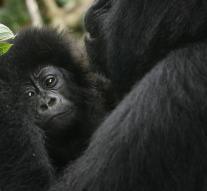 honolulu - Four of the six species of primates are threatened with extinction. On the infamous Red List of the International Union for Conservation of Nature (IUCN) now they are classified as 'critically endangered, the highest risk category.

The IUCN presented Sunday the latest list of endangered species. The four species of great apes which are threatened seriously since this year, the eastern gorilla, the western gorilla, the Bornean orangutan and the Sumatran orangutan. The other two species, the chimpanzee and the bonobo, threatening their survival.

There was also good news in this case for the giant panda and the Tibetan antelope. By various conservation measures take these types of weather in number.