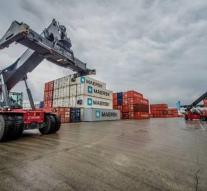 antwerp - The Colombian mafia and among other Dutch drug gangs increasingly use the port of Antwerp to smuggle into cocaine Europe. They would do that because containers are checked less thoroughly than in Rotterdam, for example. The Belgian authorities have announced an offensive.

'Drug criminals with us in Antwerp are working with drug money in the' legal 'upper world,' Flemish media quotes the Antwerp police. 'It is not possible to infiltrate several strategic sectors. Among others in police, customs, justice and business. 'The number of drug-related liquidations is also increasing.

Last year almost 30 tonnes of coke were intercepted in the port of Antwerp, six times more than three years earlier. The figure for this year is 13,000 kilograms, and in South America nearly 20 tonnes of cocaine have been seized with Antwerp.