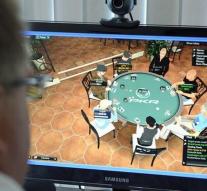 Police officers, according to Belgian media, used stolen identities to be able to do that. The Chancellor Commission has launched an investigation against the gamblers.

The agents' activities came to light when a suspended agent's bank statements revealed that he left money on online casinos and that he visited websites of casinos on the network of the Antwerp police.

The corps led to the Chancellor Commission. He discovered that dozens of accounts were created through the police network.