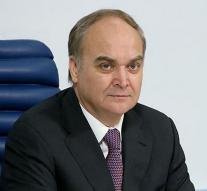 moscow - Anatoly Antonov is the ideal candidate to follow Sergei Kisljak in the course of this year as the Russian ambassador to Washington. This has been said by the Deputy Foreign Minister Sergei Riabkov on his colleague on Wednesday.

The Kremlin must formally approve Antonov's nomination for that important function in Washington, nowhere much about Russian interference with the US presidential election. In the EU, Antonov is blacklisted because of his role in the crisis in eastern Ukraine.

Before joining Foreign Affairs, Antonov, 62, was six years deputy secretary of defense. 'That's an invaluable experience for his future work in Washington. In addition, he enjoys being an excellent negotiator, 'Riabkov praises him on TV during a discussion program.

Riabkov also said that Russia has agreed to Jon Huntsman as the new US ambassador to Moscow. The White House officially pushed this diplomat on Tuesday. Huntsman earned his traces in China during the presidency of Barack Obama.