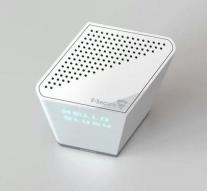 - The Finnish computer security firm F-Secure has launched a router on Wednesday with protection against viruses, malware and other malicious software and technologies embedded. The company it primarily aims to provide protection for IoT devices like smart locks and IP cameras.

The Sense uses the cloud security platform of F-Secure, where incoming data is analyzed and compared with the database on the company's servers. This also blocked malware for devices for which no security has been made, such as smart household gadgets. These generally contain poor security and F-Secure also hopes to have found a gap in the market.

Additionally, the device also protects connected PCs and mobile devices. These can all be viewed from a corresponding app, which includes the regular router settings are adjustable. The app also however acts as a security in itself, for this is to set up a so-called VPN. This data is re-routed through various channels through which can be used, for example a public Wi-Fi network in a secure manner.

For security must have a subscription to close. It costs € 8 per month, but applies to an unlimited number of devices. The first year is offered free with the purchase of the Sense.

The device continues to function as a regular router also supports the latest high-speed AC WiFi standard and transmits and receives data on both the 2.4GHz and 5GHz bands.

The scene has a suggested retail price of € 199 and comes in the spring of 2016 on the market.