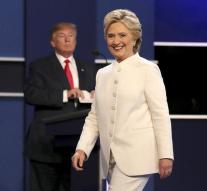 - In the run-up to the US presidential elections are becoming more anti-Semitic tweets posted. The rise in hate talk is 'by rhetoric in the election campaign, '' said the Anti-Defamation League (ADL) on Wednesday. Those Jewish-American organization dedicated to anti-Semitism.

ADL counted between August 2015 and July 2016 2.6 million tweets with anti-Semitic language. Especially after January increased the number of messages, because when the election battle erupted. The ADL is concerned that such language is normal.

The ADL also looked hateful messages directed at tens of thousands of journalists who monitor the elections. They were about 20 000 to incorporate anti-Semitic tweets, but more than 80 percent of which was directed at only ten reporters.

Of all the anti-Semitic tweets against the press was two-thirds from 1600 accounts. It mainly concerns proponents of Donald Trump, showed the Twitter bio's. That is not to say that the Trump campaign was involved or behind the tweets, highlights the ADL. According to the survey blocks Twitter, one in five anti-Semites.