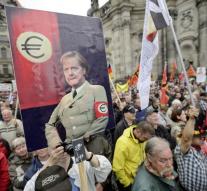 dresden - The anti- Islam movement Pegida celebrates Monday in the German city of Dresden her first birthday . Expected by the tens of thousands of people on their feet , both supporters and opponents of the "patriotic Europeans against Islamization of the West ."

The German police is preparing for a massive effort. Police Dieter Kroll has all protesters urged to ensure " that Monday without violence remains ."

Special communication teams are deployed to prevent escalation. Pegida began about a year ago with demonstrations in Germany. A week ago, the group demonstrated for the first time in Utrecht. The Public Prosecution Service is still investigating whether parts of an anti-Islam held speech punishable.

The arrested people arrested are all at liberty. In Dresden the movement recently attracted attention by a demonstration with handcuffs gallows. The accompanying texts were the execution tools 'reserved' for German Chancellor Angela Merkel and her deputy Sigmar Gabriel.