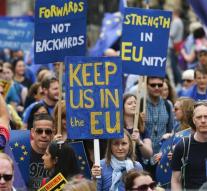 london - Several thousand pro-Europe demonstrators Saturday in London took to the streets to make their voices heard against the proposed brexit plans. The so-called march was organized for Europe to exert pressure on the British Government to the process to leave the EU provisionally set out, as British media report. Similar demonstrations, calling precisely for closer ties with Europe, found Saturday in Edinburgh, Birmingham, Oxford and Cambridge.

The demonstrators in London held a protest march from Hyde Park to Westminster Hall. Monday there will be a debate in the House of Commons on May brexit and the Prime Minister proposed Article 50 procedure that has to regulate the withdrawal from the EU. May already announced that the results of the referendum will be respected.