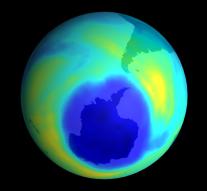 cologne - The hole in the ozone layer over the South Pole has unexpectedly grown to the second largest size ever measured. That's what scientists at the German research center DLR determined using satellites. Are likely to cause major changes in air currents in the stratosphere.

The size of the hole varies during the year and reached in the fall always the greatest form. In recent years, the ozone layer seemed to have stabilized somewhat but that is broken by the youngest decrease.