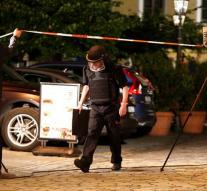 ansbach - The perpetrator of the bombing in the German town of Ansbach is a 27-year-old Syrian refugee who came to Germany two years ago, but had been denied. Reported that the Bavarian Interior Minister Joachim Herrmann in the night from Sunday to Monday.

The Syrian has twice previously tried to commit suicide and has previously been admitted to a psychiatric facility. Why his asylum application was rejected a year ago, is not clear.

The man was denied entry at the music festival held this weekend in Ansbach, because he had no ticket. How the suspect is also unclear came to the bomb. Police are investigating his phone and does not rule out that it is an Islamic terrorist attack, but there is no evidence yet.