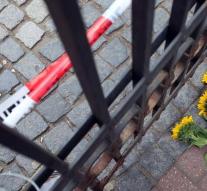 nuremberg - The perpetrator of a bombing Sunday in the Bavarian Ansbach did so with a jihadist background. The attack, according to the Bavarian Interior Minister Joachim Herrmann, not be separated from the extremist ideology. On a phone from him is a video in which he threatens revenge threatens to take against the Germans because they have slain Muslims. He proposes to do so in the name of God. He also took Abu Bakr al-Baghdadi, the leader of the terrorist organization Islamic State of.

The motivations of the 27-year-old Syrian perpetrator were possible not only Islamist. He was mentally very confused and would be deported to Bulgaria. He did earlier suicide attempt and was under psychiatric treatment. The perpetrator would come from the Syrian city of Aleppo, where he was apparently injured. He came in early July 2014 to Germany, but received no shelter.


The explosion at the entrance of a popular music festival caused fifteen wounded. Four of them were seriously injured, but they are not in danger. In the room of the offender in a refugee center found more things that serve for making bombs, says Hermann.